Failure can&#8217;t stand up before a successful individual 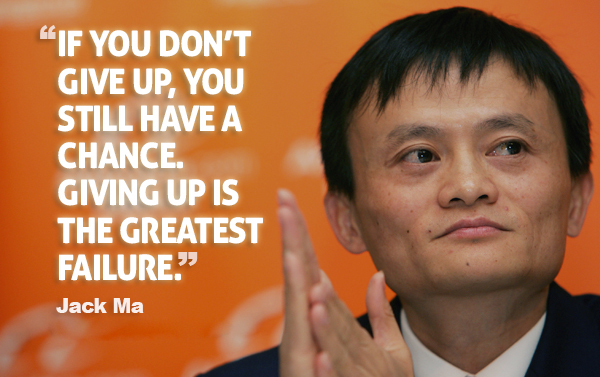 There is nobody who doesn’t know the name of the richest person. He is Jack Maa. Who is the founder and chairman of online-based world’s largest company Alibaba.com. At present, his wealth amounted to $ 3,830 billion US dollars. His real name is Maa Yun. He born at September 10, 1964 in Jiangxi province of China. Now I will discuss some information about him.

Got 1 Marks in Math Exam

Jack Maa knows well what is failure. He spoke to young entrepreneurs at the event ‘An Evening With Jack Ma’ held in Hong Kong on February 2, 2015. There he said, I have no qualifications for those young people who have the skills of today. People would tell me, ‘What are you capable of? You have never learned accounting, learned management. Do not even know anything about computers. Why do you do business? ‘Everyone knows, for the first time in the university admission test I got 1 in the math. Three times the examination did not get the chance to get admission in a good university. Finally, there was no name for the university that I was admitted to – the Hangzhou National University was then named as ‘fourth grade’ university.

Often he used to be fight with classmates. He was thin and unhealthy, because of which he could fight with others. According to Jack Maa, Liu Sheeing and Martha Avery wrote in the book ‘Alibaba’, he was not afraid to stop fighting with someone bigger than him.

Collecting Cricket was his Habit

Different people have different hobbies. Jack Ma’s hobby from the early age was collecting cricket (a kind of insect). Jack Ma’s personal assistant in Aliabad wrote in his book ‘Jack Ma: Founder and CEO of the Alibaba Group’, in his book, he collect crickets and try to make a fight among them. He became so experienced that he could say the size of his voice.

Even though he passed the high school degree, Jack was in danger for being admitted to the college for higher education. He failed in admission test for 2 times. After completing a third time, he was admitted to Hangzhou Teachers Institute.

Although he could finish his graduation in 1988, he dropped out of nearly 30 job exams. The job that has been applied for has been rejected. When the first fast food chain KFC was introduced in China, the 24 applicants who applied, Jack Ma was among them. Although 23 of the 24 people had jobs, Jack did not have a job. However, he started his employment as an English teacher in a local university.

Rejected in admission in Harvard University

In 2016 at the department of World Economic Forum, Jack Ma failed to get admission to the Harvard University of the United States after ten attempts.

Failed to build his First Company

After returning back to the United States he tried to build a internet based company, but he failed. He made directory for Chinese company on the Internet named China Pages. China page failed but he did not get down. He started Alibaaba four years later.

For successfully setting up Alibaba, he quit the post of chief executive officer in 2013. Since then, he has been working as Executive Chairman of the company.

Interesting to learn something new